Enter either your email address or your registered username here: 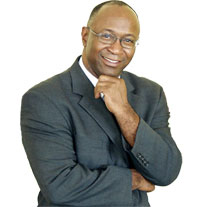 Lenell Geter is an author and professional development coach who helps people to improve in areas of personal deficiency, to gain new knowledge, awareness and insight for their careers. His experience taught him that you already possess the answer to unlock the problems that you face; however, he just wants to help you to uncover their secrets.

Lenell's faith was tested, in 1982, when he spent over 16 months in a Texas prison for a crime he did not commit. As public interest in Lenell increased, popular television shows such as 60 Minutes, The Today Show and Nightline aired his story. After he won his vindication, his story was featured on several major television networks, including CBS, NBC, and ABC.

On February 3, 1987, CBS aired "Guilty of Innocence: The Lenell Geter Story," a major motion picture for television depicting the circumstances that led to Lenell's wrongful incarceration. His personal victory was won out of faith in God, determination and the strength of his principles of life. However, it wasn't until he thought about the wealth of knowledge and wisdom that he possessed to change people's lives that he found his true passion.

His passion is to help people to discover their God-giving attitudes for success to enable individuals or families to lead successful lives. He works to equip churches, businesses, schools, and organizations to gain skills and proficiency to overcome, succeed, and prosper in areas that concern them.

Lenell and his wife Marcia reside in South Carolina, where he serves as a deacon at Brookland Baptist Church, Columbia, South Carolina.

Contact Lenell for speaking engagements
The positive in this case is his program of Psycho-Cultivation, a five-step plan for overcoming adversity and using it as the "fertilizer for future growth and success". Lenell shares his powerful belief in the potential everyone has to rise above the problems that befall them, as long as they believe they can do so. His words are powerful since he has what he advocates.
— Vicki Phillips, Author of Personal Development